Weeks away from Gear Up's 3rd ministry trip--this time taking place in Santa Lucia in the coastal region of Ecuador--things seemed to be unraveling. The already small team whittled down from 3 confirmed firefighter-trainers to just 2. Darin was already commenting that it was going to be challenging enough with 3 trainers instead of the ideal 4, but now here it was just weeks away from leaving, and one of the firefighters had to back out.

One morning during that week, I was reading the story of Gideon's Army and how God whittled down the army and created a scenario of what seemed to be overwhelming odds against Gideon and God's people. However, as most of us know, the end of the story indicates otherwise. When it was all said and done, the outcome was victorious, and God--not a super-sized army of fighting men--got the glory. As I was meditating on this familiar story, I knew the Holy Spirit was speaking to my spirit that this is exactly what was taking place with this very small team that would be heading out in September. I ran inside the house from the spot where I was reading outside so that I could share it with Darin.

Then a couple weeks later, we discovered that God wasn't through whittling.

Due to Hurricane Irma, one more firefighter didn't make it to Ecuador because his flight out of Tampa was cancelled. What an even smaller team we were left with! Darin, plus a retired fire captain from California, a builder from North Carolina, and a missionary pastor from Guayaquil, Ecuador--the Gideon's Army that would meet up in Santa Lucia and witness God's glory at work.

In Zechariah 4:10, we read, "Who dares despise the day of small things. . . " Without a doubt, God does amazing things with what seems to be so small, so insignificant or just too depleted from man's perspective. The size of the army, the amount of the provisions, or even the motley crew of its members is no big deal to our Big Deal God. In His "only God" way, He takes what we willingly offer Him and through His Spirit and power, brings the victory and the outcome that is in accordance with His will.

Over the course of 5 days, the small Gideon's Army that showed up at the Santa Lucia Fire Department trained over 50 firefighters from 8 different departments--in vehicle fires and extrications, building collapse, fire attacks, and patient assessment. Most importantly, they completed what is the crux of Gear Up Ministry, and that is sharing the love of Christ and the message of the Gospel. When a salvation invitation was given at the end of the week, 10 firefighters raised their hands in response. Pastor Jeff Davoll (who lives about 45 minutes from Santa Lucia) will be instrumental in the weeks and months ahead in counseling with these individuals and coming alongside of them in discipleship training.

As always, God is so good. And when He whittles, there's nothing little about it. 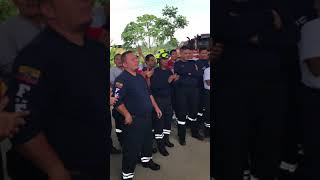 Literally What It's All About!

Training and Testimony in Tena!

Gear Up Ministry Partners with Fellowship Of Christian Firefighters International 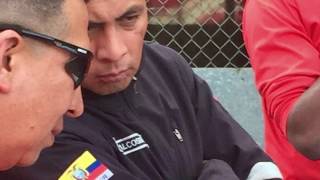 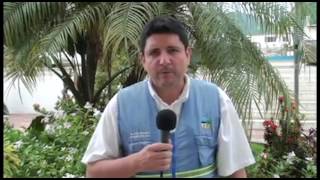 We Made the Local News! All to the Glory of God!